the LIFE & TIMES in my universe.. .. centered and uncensored.. .. & into your life & web-consciousness..

Filed under: Celebrity Trash,Change is the Only Constant — San @ 6:53 am

Blow out some candles. On the heals of it’s 5th birthday, YouTube celebrates over 2 Billion views a day!

YouTube on Sunday said that the number of videos watched daily at the website has broken the two-billion mark as the service begins celebrating its first month after it’s fifth birthday. (Although YouTube’s birthday is officially February 14, 2005, the first video was actually uploaded to the site exactly five years ago, on April 23, 2005.)

“Thanks to you, our site has crossed another milestone and now exceeds over two billion views a day,” YouTube team members said in a blog post. First of all – this was said in a blog post. A mere 15 years ago broadcasting via blogs and YouTube did not exist. Back then you watched America’s Funniest Videos. Today YOU make the video, and instantaneously broadcast it to millions without the aid of Nielsen rated television networks.

2 billion views is nearly double the prime-time audience of all three major US television networks combined. The news came with the launch of a YouTube 5 Year channel devoted to the service’s history and cultural influence.

The YouTube 5 Year channel features a “My YouTube Story” project compiling tales by people from around the world describing how YouTube has changed or shaped their lives. Rightly deserving of this self-aggrandizing project, it has revolutionized our access to video content. Youtube has made stars out of “Fred,” Justin Bieber, ijustine, the laughing baby, and many others.

Who could forget April Fool’s day 2007 when Rick Rolling became a full fledged global phenomenon. I recently found out, my old college friend who now who has been working at Youtube for the past 3 years was the mastermind behind that. She also had a hand in featuring the video for that catchy Peter John and Bjorn song “Young Folks.”

There was a time when I was shocked that someone like Tila Tequila, had a show on MTV when her fame was mostly gleaned from being known as the person on MySpace with the most friends besides Tom. Now, it’s no shock that YouTube can make stars out of cats. We live in a world where a show like American Idol, “provides a once-a-year chance for an average american to combat the the evils of today’s music business,” in the words of Idol Recapper for EW.com, Michael Slezak.

Check out some of videos guest curated by people like Katie Couric, Jonathon Adler, Conan O’Brien, and one of my favorite directors, Pedro Almodovar.

This one is cool too:

I tutor kids in the neighborhood at a shelter and yesterday I discovered that one of the teens sells bugs. He was telling me all about how he finds these centipedes, walking sticks, tarantulas, and spiders, and starting selling them online. He also sometimes buys them for others and sells them for more – to people in the UK for example. What a smart kid – I feel like I learn from kids all the time.

Today I went to a taping of American Idol. The audience was filled with young kids with their parents. I was so tired and feeling a bit sick. All I wanted to do was read my book (Oryx and Crake by Margaret Atwood) in silence but the fluffer kept trying to get everyone riled up. I should have brought earplugs for the 7 year olds that kept shrieking at any little opportunity.

David Duchovny did a little promo, and Demi Lovato and Joe Jonas performed LIVE. I saw Shirley Halperin which saved me. She is doing coverage of Idol for the LA Times. I’m glad she got an interview with the glass blowing boss who won’t shave his beard till Siohban gets voted off. I wonder if that means he won’t shave his dreads either.

I got some insight into this strange love of mainstream america. I suppose it’s about the stories of people living out their dreams – till Simon Cowell snubs them out much like one might dig their heel into a lit cigarette. That’s alright. He’ll be leaving soon. And Britain will be bringins us X Factor, or so says my friend Sally Dawson, the ultimate Dawsonator.

Ellen DeGeneres has her one woman entourage, in the form of her doting wife Portia De Rossi. 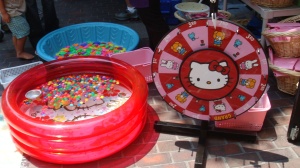 nisei week brought out the best in hello kitty fun 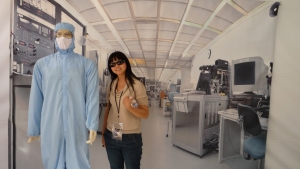 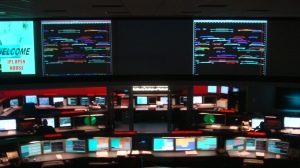 Central Control - This is where it all begins and ends...

LOS ANGELES – A MODERATE 5.0-magnitude earthquake rattled Los Angeles on Sunday but there were no reports of casualties or damage, officials said.

The quake, initially recorded as a 4.7 magnitude temblor, was centered just 10 miles (15 kilometres) southwest of downtown Los Angeles at a depth of 13 kilometres, the United States Geological Survey said.

The quake was felt across the region, shuddering buildings throughout Los Angeles, witnesses said.

AFP journalists reported that the quake knocked objects from shelves and lasted for several seconds.

This is hilarious. Check it out.

I’m off to Mammoth tomorrow for a ski trip. Ta Ta.
This evening I had dinner at SLS. Ferran Adria is pure genius. Liquid essence of olive is quite delightful.

This is pretty cool. I just downloaded Ocarina which is one of the applications that allows you to use your Iphone like a wind instrument. Totally Mentalist!